No Paine, No Gain: 20 Years of Paine Elementary 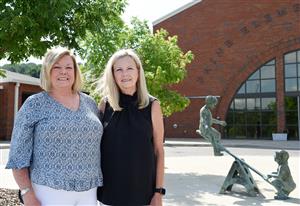 PAINE - It’s been 20 years since the dirt that forever changed the trajectory of what became Trussville City Schools was first turned.

Amerex Corporation founder Ned Paine broke the first bit of ground in August 2001 for what became Paine Primary and Paine Intermediate schools. Paine and his wife, Goldie, founded Amerex Corporation in 1971, a Trussville-based manufacturer of hand-portable and wheeled fire extinguishers. In 1999, the founding couple donated 38 acres of land across from Amerex Corporation on U.S. 11 to the Jefferson County Board of Education on the condition it be used for a new elementary school.

At the time, the Jefferson County Board of Education was already searching for available land for a new elementary school in Trussville to ease overcrowding at Hewitt Elementary School. In the fall of 2000, only four of the school’s 48 kindergarten to third grade classes met the state standard of one teacher for every 18 pupils in elementary classes. There were six portable trailers and one modular building at the lower part of the school’s campus. The school’s lunch period in 2000 began at 10 a.m. and lasted just over three hours to accommodate all of the classes. All this led in part to the need for a new school, and Ned and Goldie Paine’s donation.

See more from the Cahaba Sun.

Trussville City Schools is committed to providing a website that is accessible to the widest possible audience and in compliance with Section 508 guidelines. If you have accessibility concerns or any issues viewing our content, please call (205) 228-3006 or email at requesthelp@trussvillecityschools.com.
Copyright © 2002-2022 Blackboard, Inc. All rights reserved.